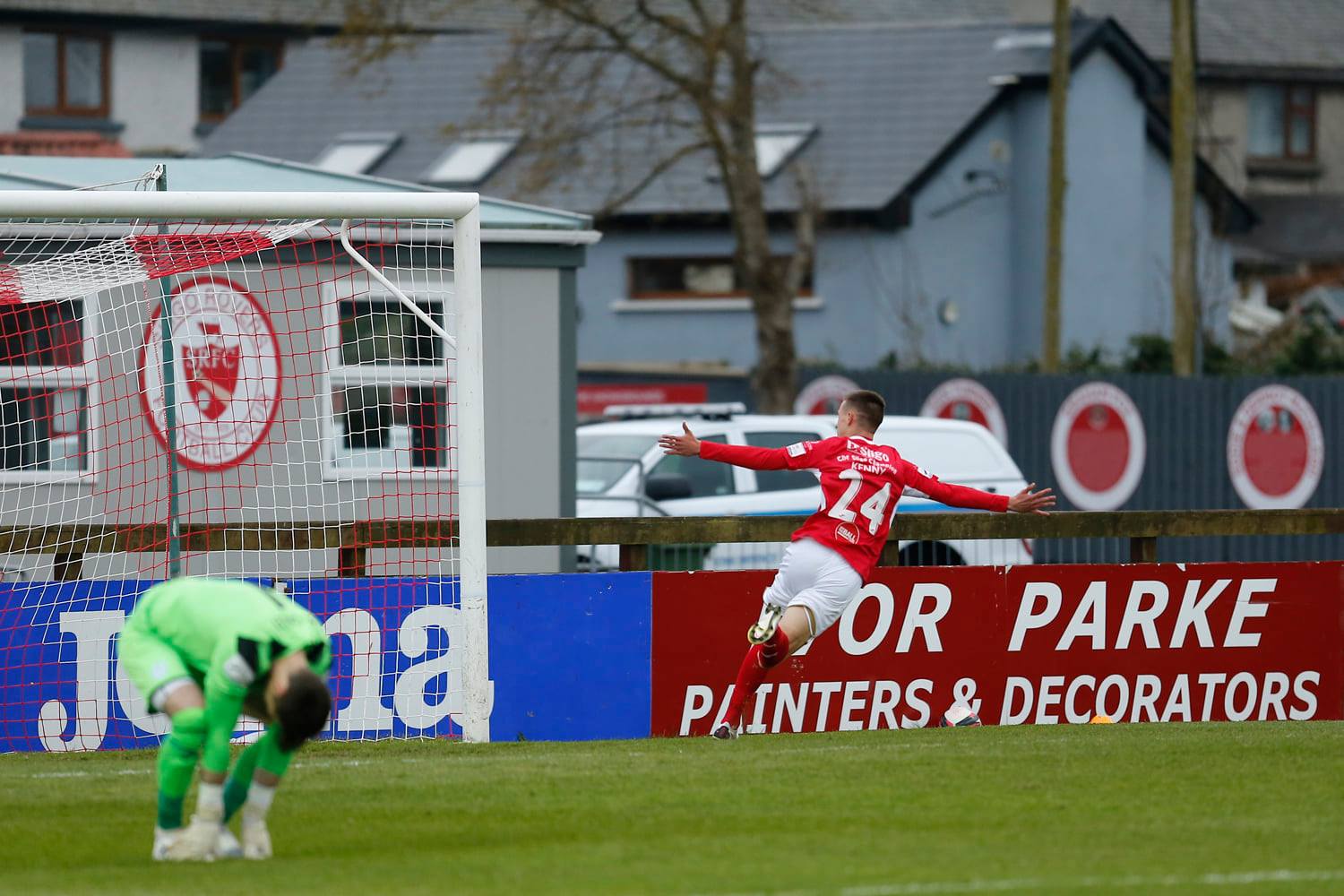 17- year old Johnny Kenny’s winning goal against Finn Harps exemplifies the product of Sligo Rovers underage academy system. Kenny is a brilliant example of a young player who rose through the ranks, signing his first professional contract for the club this January. He played for his schools side- Coola Post Primary School while also playing for his local club- Arrow Harps. Kenny went on to join Rovers U-17 team, making a big impression in recent years. This culminated in Kenny being the top scorer in the U-17 Airtricity League, having racked up 17 goals in 8 games. Having progressed to the U-19 team, he proved pivotal scoring two goals in the Shield Semi-final and four in the Final.

After signing professionally for the Bit O’ Red this season, Kenny was highly involved during pre-season friendlies. He impressed scoring a series of consecutive goals. This created a remarkable reputation as a potential goal-scorer for the club. Kenny was part of the first-team squad for every game so far this season and was taken off the bench for the game in which he scored his first ever professional goal on 17th April . Rovers’ are not necessarily short of goals, but there is a void in the position of go-to goalscorer. This is particularly evident this season as the attacking line has drastically changed. The forward-line altered having lost both Junior and Coughlan this season. Instead Figeuira, Kenny and Gibson signed, as Parkes returned.

Kenny is not the only impressive academy graduate to prove pivotal to the Sligo Rovers squad. Goalkeeper Ed Mc Ginty also came through the ranks. Mc Ginty played every minute of every game during the compressed 2020 season. He is often recognised as one of the League’s most skilled keepers. The young keeper gained international recognition as he was called up to play with the Ireland U-21 squad. Mc Ginty has been nominated for Sligo Rovers ‘Player of the year 2020’, after being recognised as ‘Man Of The Match’ on several occassions. Mc Ginty originally hails from Scotland and gained under-age experience with both Celtic and Hibernia.

After moving to Ballyshannon as a teenager, Mc Ginty joined Rovers’ U-19 ranks. Throughout this period, he was involved with the senior squad pre-season friendlies. Ed began his professional debut in 2017 and continues to wear the No.1 jersey since the 2019/2020 season. He has now established himself as first choice keeper. Mc Ginty has signed a further 2 year contract with the club in November 2020. He explains he is willing to ‘commit long term to the club’ and ‘is just getting started’.

Collooney native John Mahon began his football career with experience at his local club- Ballisodare United. Mahon quickly progressed from Rovers’ U-17 side to training with the U-19 side. Mahon began his professional career with the club in 2017 and remains a key link in the solid defensive line. Having been awarded ‘Young Player of the Year’ for the club in 2018, he remained first-choice defender throughout 2019.

Mahon has played over 60 matches for Rovers despite being ruled out for 8 months due to a broken leg. The Sligo native’s progress has not gone unnoticed as he was called into the U-21 Ireland camp in 2019. Both Celtic and Rangers were interested in the defender alongside Blackburn Rovers and Derby County. Mahon is noted for his physicality and talent in the defensive role. Mahon has also signed a 2 year contract for the Bit O’ Red in 2020, claiming that he ‘wants to get to the next level’. Liam Buckley admits ‘ he has a fantastic career ahead of him’.

Player of the season

Midfielder Niall Morahan, who was awarded Sligo Rovers Player of the season 2020, also progressed through the under-age system in place at The Showgrounds. Leitrim native Morahan began training withSligo Rovers U-17 side in 2015. In 2018 he stepped up to the club’s U-19 side and also made his professional debut this year. In August 2019 Niall signed a long term deal with Rovers via Sligo IT’s sports scholarship programme. Morahan extended his contract in October 2020. Niall explains the benefits of coming through the youth system, noting that it prepares you to ‘be up to speed with the intensity and physical demands of the league’.

Although Morahan was utilised at right-back early in his professional football career , he is now being positioned in the middle of the pitch, which he prefers. Morahan also gained an international name in 2019 having been called up for the U-19 Ireland side. Morahan has been a notable midfielder on the first-team throughout the 2020 season. Heading into this season, he has been recognised for his impressive passing and linkage play. Several other players on the first-team squad have graduated from the under-age system, but are yet to join the starting 11.

Sligo Rovers currently have five academy teams playing in the League of Ireland National Underage Leagues. The youngest team, the U-13 side, have played two seasons and are managed by Alan Farry with the assistance of Kieran Brick. Throughout 2021, this age group will be changed to U-14 meaning even more potential players can train with the team. The U-15 side managed to top their group in Phase One last season and are highly competitive. The success of this side is owed to coaches/managers Marcel Gordon, Paul Materson and Conor O’ Grady. The U-17 side, under the management of Ryan Casey, finished the 2020 season strong also. The final academy group, the U-19s, compete in the Under-19 Shield Competition and are highly competitive.
Sligo Rovers also hold a competitive season with their under-age women’s side. The team have played against challenging sides such as Shamrock Rovers and Champions Peamount United. Therefore, the potential lies for a future Sligo Rovers senior womens’ team.

Without doubt, Sligo Rovers under-age academies have played a pivotal role throughout the years. The system continues to do so, having integrated young players into the senior squad as professional athletes. This of course is the ultimate goal of the academy. Coaches, managers and all involved in the academies have much to be proud of. The after-product of the system proves highly successful. Many League of Ireland supporters admire this system, preferring to see locals rise through the ranks, as supposed to continuously signing players from abroad, while losing our own to foreign teams. The academies at The Showgrounds continue to provide pivotal players to the senior Sligo Rovers squad and are sure to foster talent and develop the future players of our club.