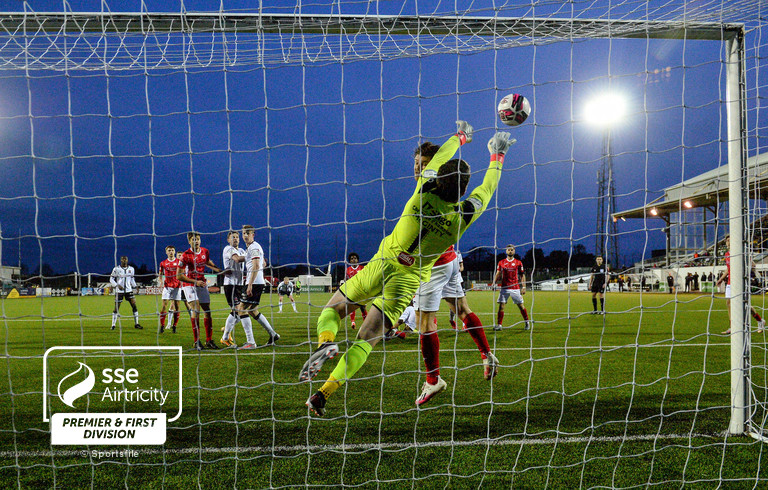 Sligo Rovers obtained a crucial win over Dundalk in Oriel Park on Friday evening after Garry Buckley’s red card threatened to undo Jordan Gibson’s stellar work in scoring a drive of sheer quality from close to 30 yards out in the first half. The result leaves us 4 points off Shamrock Rovers on top spot, however they have a game in hand.
Liam Buckley made 2 changes to the side which drew in heartbreaking fashion to St Pats last time out, with Johnny Kenny coming onto the right side to replace Mark Byrne, and Lewis Banks in for Colm Horgan in a straight swap at right back. Dundalk lined up with 2 changes, with our former man Junior Ogedi-Uzokwe up top for the Lilywhites.
The first half was a good outing for the Bit O’Red, with our boys being able to peg back Dundalk and starve them of the ball. This was almost rewarded in some style after 10 minutes by Walter Figueira after some tepid Dundalk defending led to him creating space and unleashing a venomous effort from the edge of the box which smacked against the crossbar (“The crossbar’s still ringing” is a quote and all that, but I wouldn’t be surprised if there was still sound coming out of it). Rovers kept at Dundalk though, and hit the front after 30 minutes through Jordan Gibson’s piledriver into the bottom corner after Romeo Parkes’ hold-up play allowed the Englishman to nutmeg Andy Boyle and drive towards goal.
The second started in the same vein for Rovers, with Dundalk timid and direct on the ball until Garry Buckley’s second yellow card for his second high foot of the match. Liam Buckley then replaced Romeo Parkes for Shane Blaney in an attempt to plug the hole in the defence vacated by Buckley’s (Garry’s not Liam’s) suspension. Despite their man advantage, Dundalk remained unable to string a move together until the closing stages of the match, by which time the Bit O’Red were sitting deep and attempting to counter-attack. These moves were both met by the head of Wilfried Zahibo who called Ed McGinty into action with one routine and one excellent save.
Woop woop, sorry for the delay in getting the report up folks, prior commitments and all that. The boys finally get a full week’s rest (or training depending on Liam’s mood) before our next match against Waterford next Saturday. We’ll have a report and post-match reaction on borst.ie.
Teams

Ed McGinty: 7 – Played really well, was authoritative and commanding even without his two late saves.
Lewis Banks: 6 – Cool, calm and collected.
Garry Buckley: 5 – Was alright until his fairly idiotic red. We might suffer with him suspended against Waterford.
John Mahon: 6 – Imperative at the back today.
Robbie McCourt: 6 – Decent up and down the left side.
Greg Bolger: 6 – Led well in the middle.
Niall Morahan: 6 – Did the dirty work well.
Walter Figueira: 6 – Played good and solid. If he scored that chance in the first half I would still be celebrating, even now.
Jordan Gibson: 8 – Is he too good?
Romeo Parkes: 6 – Showed brilliant control to assist Gibson’s goal. Sacrificed for Blaney after the red card.
Johnny Kenny: 6 – Good and energetic as usual.
Shane Blaney: 6 – Steadied the ship well after Buckley’s red.
Colm Horgan: N/A – Like the last game but the other way around where he played as a sort of wide midfielder on the right instead of a winger at the end of the game.